I’ve always been curious when it comes to careers and hobbies. And most of the times curiosity leads to fresh and interesting conversations like the one I had a couple of weeks ago when I had the opportunity to meet Reiko Muranaga, a San Francisco Traditional Oil Painter.

Before meeting Reiko in person, I heard a lot of positive things about her through my girlfriend, Mona, who has been helping her out with various interesting projects. During the first in-person meeting and further conversation I realized that all the things I had heard from her were real.

Reiko is friendly and opened to talk about almost anything, which for me was a great detail as I often like asking a lot of questions. I was quickly interested in the projects Mona and Reiko have been working on together as well as in Reiko’s career and future events such as the Hunters Point Shipyard Open Studios, in which she will be opening her studio to the public, along with 150 artists this coming Saturday and Sunday, October 18th and 19th, respectively. In other words, the artist’s work space will be an exhibit space for the general public. This only happens two days each six months (another open studios in the spring). This is an opportunity when general public can meet artists, talk to them, or buy art directly if they found something they like.

Having so much to talk about and so little time, Reiko invited us to go over to her studio that Sunday afternoon. As soon as we got in, I was surprised with the environment and of course, the oil paintings. It is probably normal for an artist to see all type of colors in a table and almost everywhere, but it wasn’t the case for me. Reiko rapidly explained to us a lot of what she does, how she does it, when she does it, and also why she does it.
Art is complex, but she makes it simple. Reiko’s studio has a big air purifier, over hundreds of used color tubes and brushes, dozen of traditional abstract oil paintings drying out, and an unique feeling of appreciation towards art, especially oil painting. It felt like an Art 101 class. 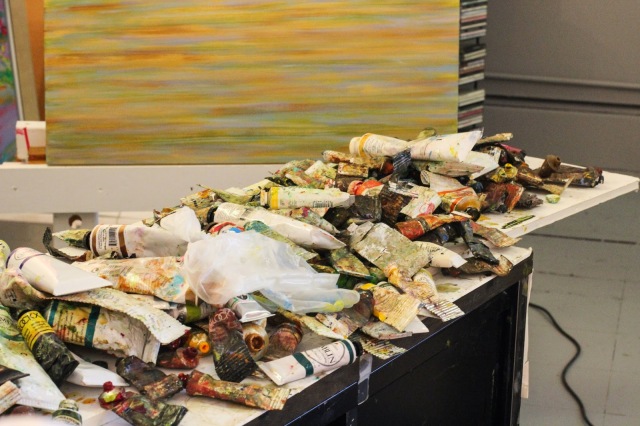 Reiko deeply explained to us some of her painting techniques and that she enjoys listening to instrumental music including Rachmaninov, Mozart, Beethoven, and Latin Jazz. She also went further and told us a little bit of history on what are some of the best color tubes in the market, where they are made and its prices.

A really interesting moment during this chat was when Reiko squeezed oil colors out of the tubes made by different manufactures and showed to Mona and me the differences between them. But, adding to that, she also guided my hand, so I can feel what it was like to use a palette knife to mix the oil colors on the table. By the way, the big table in which Reiko mixes oil colors is actually a shower door! (Picture above) – Crazy yet awesome thing is that she found it at a second hand shop and lined with oil proof palette paper! Isn’t that creative?

One of the things that called my attention quickly was the fact that Reiko doesn’t sit down to paint, but rather stand on her feet all day, sometimes throughout the night. 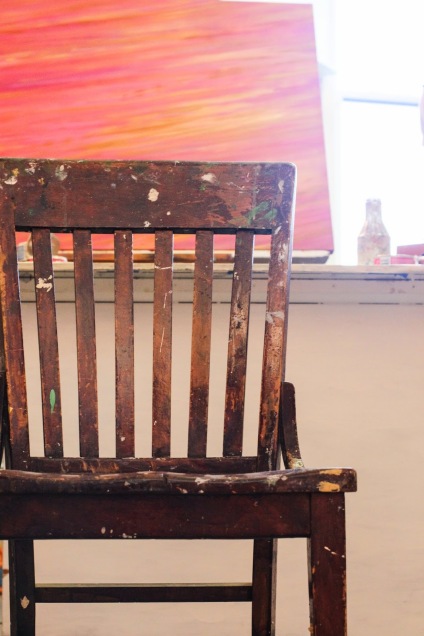 When it comes to painting, each piece is different. Some small canvas can take up to one year to finish, while a large one can take about 3 to 5 years. In fact, one of the largest canvas Reiko has painted took her 5 years to finish it – this master piece is right now at the Hotel Nikko, San Francisco. Amazing, right? 🙂

I saw some of her oil paintings while we were chatting in her studio and I have to mention that these pieces are fantastic. Some of them pop out and looks 3D.

If you are living in San Francisco or in the Bay Area, you should check out this event and make sure you don’t miss out Reiko’s wonderful oil paintings! 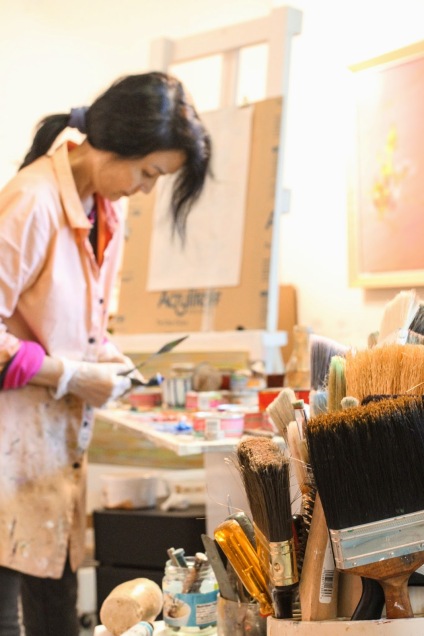